The Farming of Bones by Edwidge Danticat review 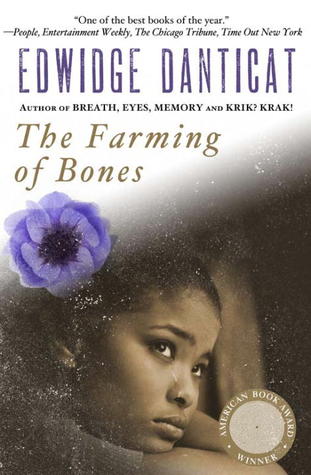 "Every chapter cuts deep, and you feel it…. ‘The Farming of Bones’ always remains focused, with precise, disciplined language, and in doing so, it uncovers moments of raw humanness. This is a book that, confronted with corpses, has the cold-eyed courage to find a smile." - Time magazine

It's important to understand the historical development of countries all over the world. We are living in a time that racist remarks and political policies are desensitising us. We must not forget the horror that racism can bring to humanity like it did to the Haitians and Dominicans. The Farming of Bones is a beautifully written, and also, a frightening remembrance of vital historical events that must not be forgotten.

The Farming of Bones has several themes running through it: racism, love, family, relationships, death/life, and dreams as an escape of the harsh reality. Danticat alternates the chapters  to express how one looks back at events that they recall in their memory. It is not in a chronological and linear way. People remember an object, for instance the narrator describes the lanterns families light on Christmas. So for the author to chop up the story, it parallels with the way in which people recall history. Danticat knows the importance of telling history from many different perspectives rather than one grand narrative. But also she finds importance in being able to ‘lay’ history down and not dwell on it. The narrator describes her own significance of sharing her story, Amabelle declares:

An interesting moment in the beginning of the novel was the description of the twin babies. The babies are a representation of the historical events that occur in the novel. The son of the Valencias was described as “coconut-cream coloured” and “cherimoya milk color.” The daughter’s “skin was a deep bronze, between the colours of nut shells and black salsify” with “a little charcoal behind the ears.” (p. 11;17). The twins are a definite representation of the Haitan and of the Dominican. Both born as equals as they are twins but on the outside have different skin variations. As the story further develops the reader realises that the birth of the twins and later the death of Rafi is a representation and fore shadow of the novels events. Rosalina is a representation of Haitians and during her birth “the little girl had a struggle.” The umbilical cord was wrapped around her neck with a caul over her face. The doctor points out that “it’s as if the other one tried to strangle her.” Doctor Javier continues: “Many of us start out as twins in the belly and do away with the other.” (p. 19) The twin babies in the womb represent the island. The Haitians and the Dominicans both occupying the island, using the resources and born as equals yet find reasons to do harm to the other.