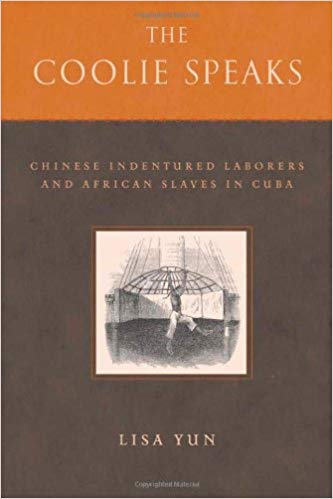 The Coolie Speaks by Lisa Yun is a nonfiction book that provides a historical and cultural analysis of the Chinese indentured laborers that were utilized in Cuba during the years 1847-1878. A main objective of the book is to give voice to the coolies in Cuba who described “their experiences within a slave society in the Americas” (Yun, 2008, p. xvi). Lisa Yun analyses the “coolie narrative” by studying a testimony case from Cuba in 1847 of 2,841 Chinese coolies (p. xvi). In the first chapter, Yun historically contextualizes the trafficking of the quarter of a million Chinese who were brought to the Americas to be a part of a contract labor system, and the political economy that shaped it. In the following chapters, Yun investigates the coolie testimonies and argues that “the coolies of Cuba suggested radical critiques of the contract institution” (p. xvi). Yun also traces the second-generation perspective of the Afro-Chinese author from Cuba, Antonio Chuffat Latour, by examining his communal biography. To conclude, Yun connects the narratives to contemporary narratives of global migrant labor.

Yun’s historical analysis and overview of the Chinese coolies in Cuba in relation to slavery show that the transition from slavery to indentured labor in Cuba was not a linear one. This is contrary to the “narrative of transition” that framed Chinese coolie labor acting as an intermediary between “slave and free” on the labor hierarchy, in between “black and white” in racial terms, and as “mediums for progress and modernization” (Yun, 2008, p. 1). The transition narrative characterized coolie labor in racial terms as being more skilled and suited for modern labor with machinery, and more progressive as the contract system was considered to be a step towards free labor.

Contrary to the transitional narrative, the Chinese laborers were mostly used for agriculture work where coolies and slaves worked together on sugar plantations. In fact, the Chinese coolie system and slavery coexisted for decades. And as indicated in the testimonies, the coolies were sometimes subject to even worse treatment than slaves despite their ‘contracted’ labor.   Mortality rates for coolies were much higher than African slaves: “over 50 percent of coolies died before their 8-year contract ended. The average life span of an African slave on a sugar plantation was twenty years” (p. 29).  The coerced contract labor was actually an “extension of slavery” and far from a transition to free labor (Yun, 2008, p. 4). Yun argues that “the coolie testimonies concern a peculiar and efficacious perversion of the contract institution, producing “consent” based upon potentialities of “future” freedom in the context of a racialized social contract” (p. 5). The “contract” institution was in fact illusionary: “the contract was actually a tool deployed to entrap and enslave the coolie” (p. 111). The contract system became a system of exploitation that perpetuated coolie enslavement through what Yun terms as the “paper chase” (p. 111). The testimonies detailed the continual deferment of freedom due to recontract laws and the endless battle to acquire for various papers, such as the “freedom paper”, which ultimately created a system of perpetual bondage.

Another important point in Yun’s analysis that disrupts the transitional narrative, is that African labor actually increased after coolie imports, which provides evidence that coolie labor did not replace slave labor. This indicates that clearly there was not a break from the past labor supply. Yun demonstrates that African labor importation decreased prior to the importation of Chinese labor in 1847. Thereafter, however, African labor importation increased and continued to increase coinciding with Chinese labor importation. In the period of coolie importation to Cuba, Cuba’s sugar production had a sevenfold increase. Indeed, coolie and slave trade in Cuba was financed by the profits of sugar and financed by the same multinational commercial interests.

The methodology utilized in _The Coolie Speaks_consists of a mixture of historical, cultural and literary analysis. The main primary sources that were examined for this research study included: 1,176 oral testimonies (depositions) and 1,665 written testimonies (petitions) of Chinese coolies who detailed the experiences that were endured by Cuban employers, and the 1876 Cuba Commission Report that investigated the treatment of the Chinese immigrant laborers in Cuba.

Yun undertakes a close reading of the testimonies which she argues can be read as narratives “that display certain tropes and conventions and that also contain certain themes and arguments” (2008, p. xvi). The analysis places the coolie perspectives “in relation to literary genres and also historical and philosophical debates of slavery and freedom” (p. xvi). Yun considers the testimonies to be testimonies of resistance that “creatively and graphically described slavery, indicted a system of human traffic and bondage, and sought freedom” (p. 53). The author recognizes the close reading of African slave narratives as a comparable methodology for analyzing coolie testimonies:

The critical questions and methodologies raised by treatments of slave writings are entirely useful in an interrogation of the written testimonies by Chinese coolies in Cuba, which included verse, literary allusions, historical reference, cultural metaphors, and repeated tropes of witnessing, veracity and resistance. Like African slaves, the great desire of the coolies _to tell_was limited by oppressive circumstances, material deprivation, social hierarchies, and of course, the punitive force of their owners and a “plantocracy” that oppressed the coolie through manipulations of the “contract. (Yun, 2008, p. 56)

The testifiers were located in the main sites of sugar plantations and sugar mills, including the provinces, Havana, Matanzas, and Santa Clara. The research study drew conclusions from 100 percent of the testimonies. Another methodological aspect to consider was the complex task of translating the materials for the research due to the various Chinese dialects and use of archaic language.

It is interesting to note the missing female perspectives of the Chinese in Cuba, despite there being mentions in the testimonies of Chinese girls and women imprisoned on some of the ships as well as advertisements in Cuban newspapers selling Chinese women and girls. As the author points out the women did not have the opportunity to share their experiences with the commission, which “raises critical questions regarding narration and representation as well as certain testimonial omissions along gender lines” (p. 63).

This book is the first to document the voices of the Chinese coolies in Cuba. It is an important historical book that is hard to read at times due to the stories that the coolies. But that does not mean one should shy away from reading these important artifacts of history.

It’s hard to understand how people throughout history have given themselves the right to take posession of other human beings as if they were belongings. It is even harder to understand how it can still happen.

And not only taken them as their belonging but abuse them severely as well. ☹️

I love how most of the books you read are truly meaningful Evelina, it's great to see that you want to learn about other cultures.

#3 Tbh, if it were not an assigned literature I don’t think I would have ever bought the book on my own because of the price and I have never heard of it, but I do think it is really informative and I recommend it to anyone interested in Economic history or history in general 😊

#4 Haha I appreciate the honesty! What is your favourite genre to read outside of your studies?

Cli-fi (climate change fiction) and political nonfiction books. What about you?